I thought I better update you on Sam’s progress; he was given a Green Light when he had his stitches removed! Yay! The two of us drove into William’s Lake, spent the night in a hotel which equals a bath for me and sausages or bacon for Breakfast for Sam! Our fave things about staying in a hotel! I do wish I could use their gym/pool facilities but I can’t leave Sam alone; “in the club with Keaira Lashae”, for the win!
The weather is starting to heat up a lil so that means that I can’t even go grocery shopping because I won’t risk leaving Sam alone in the truck while battling the WL Save on Foods shoppers. And I always get stuck bagging my own groceries when I am there which leaves me very unimpressed-Safeway may soon have all Luke’s hard earned cash!
Anyway! Sam’s vet visit: we arrived 20 minutes early which was a silly thing to do. There was only one vet in that day and a gazillion emergencies! Sam and I waited patiently for 1 3/4 hours before I piped up; the front end staff got me in, within minutes, to a vet tech. So technically Sam wasn’t seen by a vet but did have his stitches removed by the tech. She said they looked really good and I am going to go with that because the week prior we were in seeing the vet to have Sam’s drain removed and he said it all looked good. They did say that we could take Sam’s stitches out if we felt comfortable doing so but I have to tell you, it’s a long, jagged scar and well, we want Sam to love us forever and ever so we thought we would leave the tugging, pulling job to the pros. They gave him a complimentary nail clipping too which is fabulous seeing how he likes to rip his nails off when he is bolting about the woods!
Sad story though. All that waiting in the vets office? One set of dog owners received bad news about their lil fella. And another couple brought in their faithful 12 year old German Shepherd, Cinnamon; she was not going well and her owners decided to do what was best for her which just had everyone in the office sniffling. I held it together until I heard Cinnamon cry out then, the vet came out and SHE had red rimmed eyes! I could not have been a vet!

This is the lane I am learning to love. We have watched it change with the seasons over the past 7 months. I think I can honestly say I prefer it covered with snow and ice: not so bumpy, not mucky, can easily see animal tracks and NOT a dust bowl. I AM getting used to the bumps though and can easily navigate around the really bad spots.
I have driven it many times in the past few months what with returning Benny to his Mum, driving Samwise Gamgee to and from Vet visits, making a “quick” grocery run to Nimpo Lake to make sure Luke has just enough to see him through my absence when I go down to the Valley next week. Honestly,  I thought that sans snow and ice, the drive would be a lil bit quicker but it isn’t! I guess I now drive slower because of all the protruding boulders, loose rocks, wash-board sections and there are still a few big puddles I have to make my way through; that ONE though? Holy moly! She’s getting DEEP! It’s on the unmaintained section of our drive so one just grins and bears it, finds the best way through. At first, yes, it was deep, but then it seemed to be drying out and now? All of a sudden, it is super deep again! I suppose it may have rained and filled up but …well, it’s not that far away from us and here at Brittany Lake,  we have only had a few minutes of spitting rain…apparently we live in the Apple Tree Creek of BC!  (Luke’s home in Australia – the rain always misses ATC too!)
At any rate, I now drive with one set of tires on dry ground leaving the other set to be swallowed whole by the deep maw of the puddle; hope it doesn’t one day “bite” my tyres leaving me stranded in a quagmire of mud until someone comes along the deserted road to rescue me!  I digress; it takes me roughly 1 1/2 hours to get to Highway 20 which is not a whole lot faster than when it was covered with snow and ice! But Highway 20 is definitelyMUCH easier to navigate sans snow and ice. 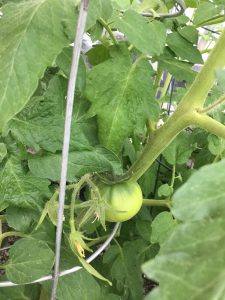 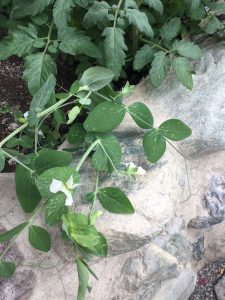 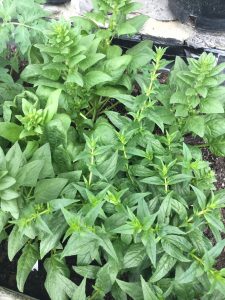 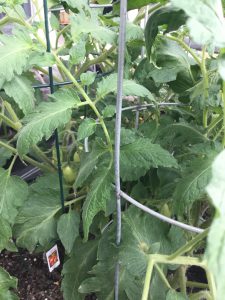 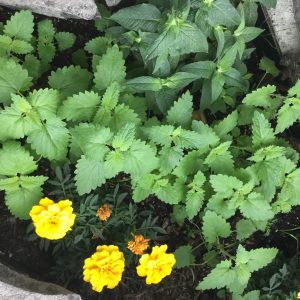 Spring has finally sprung. And while it may not be super hot, the Greenhouse is definitely heating up! I think we did have a couple of days that saw the mercury hit 26C which made the Greenhouse super hot! Hot enough to make the spinach bolt. I would plant outside but the mozzies are thicker than a winter blanket and, well, it still gets super cold at night. I did plant my hydrangeas out doors and one seems to be limping along while the other, which I cut back, seems to be doing alright. I also planted out my Lupines; same story, one practically dead and the other seems to be alright. I planted out my azalea and…whoa….it has taken a beating! I am seeing some new life at the base of the bush so I really ought to brave the mozzies and cut it back so it doesn’t waste its time sending nutrients and energy to the dead parts. Oh, if the wind picks up today, I’ll do that!  To satisfy your curiosity, the garden on the East side, which gets heaps of sunshine is the side that is crying out for help! The West side garden is fighting the good fight and winning! It gets brilliant afternoon sunshine.
I have yet to plant any veg out of doors. I’m nervous about doing so. I guess it is only a few seeds? Right? Right? While I’m in the Valley next week I will purchase a hoe so I am better equipped to deal with all those weeds that seem to be doing swimmingly well in both gardens! Oh, and I found a lil rhubarb patch! And a couple of fruit trees! Previous owner probably told me about both but it didn’t compute until evidence of each sprouted new life!
I might also mention that the natural fauna is greening up quite nicely! I am forever amazed at the tenacity of alpine flowers! I see lily-like leaves sprouting which have yet to produce a flower; I am super curious to see what they are!  There are also is also an abundance of alpine strawberries; we have our very own Strawberry Flats! (reference to Strawberry Flats in Manning Park which, if you have not visited, you totally should!) I keep trying to avoid stepping upon them but then realize I would not be able to walk anywhere if a few were not to give their lives that I may walk out the front door.

Until next time, then, Cheers!