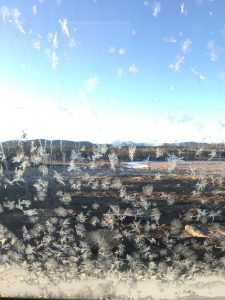 Ah, the Seasons! We arrived at the Earthship late October 2016 and watched as Winter descended upon us. We were awestruck, to say the least. And then came the Spring. And we watched Winter retreat. What we observed was that Winter arrived on the breath of a cold wind but was slow to depart, wanting to keep us in her icy cold grip for just another day…

Please use your Browser Back button to navigate through the photo Gallery. Sorry for the inconvenience.

The Fall of 2016 had us feeling inadequately prepared for the advent of our first Chilcotin Winter but we were prepared to meet it head on and come what may!
We bought out the Mark’s in Chilliwack buying up all the warm, stay dry clothing we could think of; too bad we didn’t think about anything past the Winter. In my opinion, you need hip waders to see you through the melt! Okay, maybe not quite that bad but man! I have never experienced a melt quite like this. And the muck, oh all the muck! We probably would not have been so cognizant of all the muck but for 8 dog paws tracking all that muck into the Earthship! We eventually laid old sheets along all the tile because it was easier to do that than wash the floor 15 times a day! Okay, not 15 but definitely 8 times a day.
We discovered that  all the mounds of snow that we had created in shovelling pathways around the place would melt, simultaneously, merging together in front of the Greenhouse door that we use as our main entrance. There were some slabs of rock laying in front of the Greenhouse; we quickly pulled those into service, using them as stepping stones strategically placed in the worst spots of ankle deep muck. That worked for Luke and I but Bear and Sam almost seemed to avoid stepping on them, totally defeating the purpose of placing them where we did. Groan! This year? Maybe they should just have to wear boots when they go out and have them taken off just inside the Greenhouse!
Note to self: purchase doggy rubber boots!
I made the mistake of escaping to the Fraser Valley just as the melt was starting; when I returned home I found myself wishing the truck could morph into a boat to get through some of those puddles! Lakes.
This year we will stay put until the roads are passable without the worry of sinking to the bottom of a bottomless puddle!